The library, not present in Keats’s time and which numbers up to eight thousand volumes, was created by Harry Nelson Gay ‘through the happy labours of many years in selecting the books and periodicals devoted to Keats, Shelley, Byron and Leigh Hunt’.
It has many early printed volumes relating to these second generation Romantics and it is best endowed with Byron-related works; the library contains nearly all the collected editions of the nineteenth and many of those of the twentieth centuries. Italian translations are very well represented and there is an excellent range of Italian studies of Byron’s work. There are several first editions of works by Keats and Shelley. Among the most significant are: Keats’s Poems of 1817, Endymion and Lamia, Isabella, The Eve of St. Agnes and Other Poems and Shelley’s Adonais, Alastor, Prometheus Unbound and his 1824 Posthumous Poems. As with Byron, there are also early Italian translations of their work and Italian studies of both poets.

The library holds many lifetime and nineteenth-century editions of the works of other Romantics and influential writers of the period including William Hazlitt, Leigh Hunt, William Godwin and Thomas Lovell Beddoes. There is an interesting small collection of travel and history books celebrating the ‘Grand Tour’. There is an impressive range of contemporary serials which contain most of the reviews of the works of the second generation Romantics published during their lifetimes and texts of works first published in periodicals.

The library may be consulted by application to the Director, but please bear in mind that its focus is English Romanticism and that, for students and scholars based outside Italy, libraries nearer at hand may well have similar, if not identical, holdings and should be used in the first instance. Only one user can be accommodated at any given time. Books must be consulted in the office, where there is a dedicated reading room providing a computer with internet access.

If you wish to use the library please consult the guidance for users of the library. When you have your letter of recommendation please contact us or email (info@keats-shelley-house.org) stating the nature of your research and, where possible, which books you intend to consult.

The Babingtons's Tea Experience at the Keats-Shelley House

PANORAMIC TOUR WITH A LIVE GUIDE 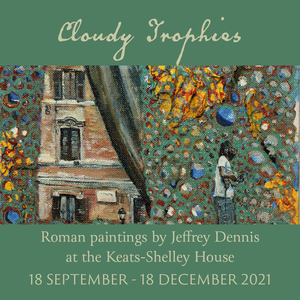 Find out more about our commercial partner DIVENTO.